Who is Really Directing Your Life? A guide to Active Awareness - Part 3 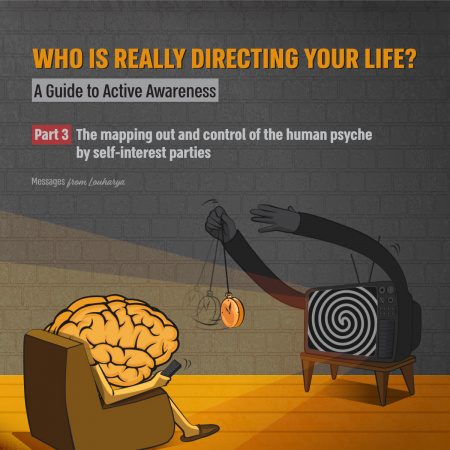 This is the third part of the article ‘Who is Really Directing Your Life? A Guide to 'Active Awareness'.

In the previous chapter, I described the state of being of ‘Active Awareness’ as the gatekeeper of your personal consciousness. I emphasized the importance of inner listening, and the ability to control the large quantity of information, and filter the data that you let into your psyche and your lives - and how these factors will influence your freedom and your ability to maintain your self-identity.

In this chapter, I would like to expand on the world we live in, which is turning more and more into a world where every movement of ours is monitored and measured in order to gain information that allows to influence us and shape our identity and choices.

As mentioned, the media, entertainment channels, and social networks have mapped out the human psyche using statistical models that can predict human behavior and its response to different stimulation.

Every movement of your hand with the mouse, on your computer screen, is estimated and weighed. The applications you use are monitored and provide information. Your surfing habits are recorded. Everything is monitored and listed: searches using search engines, your “likes”, articles you read, the music you hear, your purchases, your social circles, and so on.

This accumulation of information, along with the familiarity with human thought patterns, emotional systems and desires, and the mapping out of the common and widespread human model, enables to easily push the “buttons” in the human psyche, by stimulating and activating basic mental-emotional mechanisms that encourage the desired response.  Thus, trends are being initiated actively and public opinion is directed, by bringing the attention to specific issues, protests, and even conflicts and confrontations between different sides and layers of the population.

We are surrounded by factors that know how to push the appropriate switches of the human psyche in order to activate human emotions and produce a system of responses: to elicit a sense of identification with a situation, solidarity, mercy, and a desire to assist, and also to fuel emotions of anger, hatred, frustration, and violence.

We are flooded with information to the point that one cannot distinguish between what is true and what is a lie.

Technology enables to produce fake news and even to create false video clips and have speakers say things that look totally real but in fact, were created with advanced computer simulations and voice samples that were taken from the web (look for the term ‘deep fake video’).

The virtual realm, which is turning into an inseparable part of human life, is a realm in which one is required to learn to conduct themselves in, to become acquainted and oriented, and most importantly - identify the various influencing factors, and maintain self-identity that is not biased, reactive or manipulated like a puppet on strings, by self-interested parties.

Human beings are required to evolve beyond the human mental-emotional patterns prevalent among the public, awaken, expand their consciousness, change their behaviors and create transformation that will free them from the systems of influence and deviation.

If humanity wants to succeed in coping with all that I have described, it must be weaned from the egoistic, polarized and separatist world view, from prejudice and limiting thought patterns, to grow up emotionally and evolve beyond the limited emotional range that is so easily manipulated and influenced, because it tends towards polarization, a lack of stability and is in need of emotional nourishment.

This is an evolutionary process in which human emotions are required to evolve towards a new emotional range, where the prevalent human emotion is one of compassion, love, unity, and an enlightened heart. An emotional range that holds emotional independence and emotional fortitude that prevent negative influence and addiction to stormy and charged emotions that seek to be released.

The prevalent human tendency towards polarity that awakens a sense of excitement and vitality, and the chase after urges and emotions that create an experience of release and catharsis. The tendency towards repressed violence that seeks to be expressed. The addiction to the emotional experience that gives a sense of pleasure, meaning and value; the focus on the egoistic self, and the never-ending need to satisfy it - has brought forth both hidden and visible systems of influence that direct public opinion and collective consciousness and create predicted and anticipated trends.

???? Reality shows - engineer a product according to formulas that are designed to create viewer addiction while feeding them with world perceptions and norms that trap them in an endless cycle and enhance the loss of their authentic identity, as they follow biased conceptual models that become the popular norm.

The most delusional and distorted result of “reality culture” is US President Donald Trump, which reflects in a sharp and unsettling manner the dormant and distorted public consciousness which is the product of the takeover of consciousness and the distortion of the mind.

Another example are the survivors of the reality shows who become public opinion leaders, and maintain an endless loop of veiled mass consciousness by keeping people's mind busy in yearning to the way they live while adopting models of beauty, consumerism, and an outlook that is superficial, distorted and often lacks any meaning or essence.

???? Corporations - engineer and produce products that are marketed in a sophisticated manner, when in actuality we do not really need many of them.

We are continually exposed to an endless flow of specifically directed information: pictures, words, impressions, hidden and visible advertisements, public opinion leaders that influence the subconscious and self-identity - all of which are intended to maintain a continual desire for distorted models of beauty and lifestyle, and enhance the endless cycle of consumerism being fed by these distorted models, which harm and damage the self-perception and the psyche, and destroys the Earth’s resources.

???? The media - promote ideas and agendas that trap consciousness in a narrative that veils and hides the broader picture, and what is occurring behind the scenes.

The biased coverage, the struggle for ratings, and the tight connection to capital owners turn the media into a trap that deceives the general public which is being led astray by using biased information that often grants legitimacy to trends that become the norm.

This is an ongoing process that weakens the public as an influencing force, creating well-synchronized processes of divide and conquer, instigating and provoking, thus shifting attention to internal struggles and weakening the public’s ability to conduct itself with awareness, unite forces, and become proactive.

???? The social networks - became a fertile ground for invented, biased and false information, and for divisive content that polarizes and promotes violence, all because of the desire to trap the individual in an endless scroll that is directed by algorithms encouraging harmful and antisocial behavior, in order to make a profit (I wrote about it extensively in the first chapter).

How to manage with all these influences ❓  How is it possible to maintain personal freedom, the uniqueness, and the authentic identity ❓

In the next chapter, I will talk to you about the need to “go beyond the norm” in order not to become part of the herd, which is predictable and easily influenced. I will also discuss the importance of transformational processes that connect you to a new type of humanness, which is not easily maneuvered or influenced.

Yours with much love and goodwill ????