Seeds of Hope – The Human Being as a Magician-Alchemist 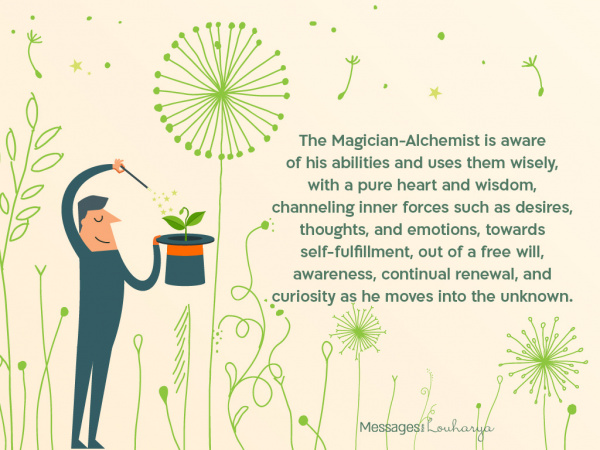 All human beings are spiritual beings that know to transform energy into matter.

Our desires, wishes, thoughts, ideas, and emotions we have, are used to produce physical outcomes that are expressed in every part of our lives here on Earth both as actions and as different and diverse physical products.

Each and every individual holds a natural inherent ability to turn theoretical potentials into products manifested as physical matter. This is an ability to mediate between a world of energy that is theoretical, spiritual, and abstract - and a world of action and manifestation.

We all have the ability to transform spirit into matter and translate abstract energy into physical products that we can experience through the senses. However, many do this without being aware of it, without knowing that they are magicians-alchemists. As a result, they tend to cling to their physical achievements and manifestations, which define them, their sense of security and comfort.

The magician-alchemist is aware of his ability to create, and uses them wisely, channeling inner forces such as desires, thoughts, and emotions, towards self-fulfillment, by creating free and aware choice, willingness for continual renewal, and curiosity to explore uncharted lands.

This is a dynamic and exciting process of discovery, where the magician-alchemist, turns the hidden into visible, the unknown into the known and familiar, continually awakening new potentials from within.

This type of alchemy occurs when the individual is connected to his distillate inner self, whose very essence is development and continual renewal. When the individual clings to that which is known and familiar, refraining from development and renewal, holding onto comfort zones and a false sense of security - he moves away from his true nature as the magician-alchemist and slowly turns from a being that turns spirit into matter, into being trapped in matter.

This creates a reversal of meanings and leads to an endless circle that prevents Enhanced Fulfillment where one is free to express his full potential.

Human beings are reluctant to embrace the unknown and are extremely tied to that which is known and familiar and defines their sense of security. This may be likened to a situation in which the magician-alchemist uses his magic to create physical things, and becomes attached to his creations, forgetting that he is the one who created them and that wherever he goes he can create more and more products, using his inherent ability to create.

Try to imagine a magician that waves his wand and pulls a rabbit from his hat, and then clutches the rabbit tight, refusing to let go because he sees it as something that defines him and his sense of security. ????????

The further the person moves away from the understanding that he is a magicians-alchemist, the more he fears the unknown and unfamiliar. This fear is a result of the alchemist forgetting that he can translate spirit into matter and turn theoretical potentials into a physically manifested reality.

The human being is composed of many different layers, an alchemist-magician seeking to create meaning and fulfill the creation of ex nihilo – “something out of nothing”. The “nothing” is composed of the potentials seeded within the individual, that are yet to be materialized by him. These are latent potentials that the individual may manifest - as “something”. This is alchemy, where the individual uses his spirit, body, and psyche to grant intent and direction which creates new meanings.

This may be likened to a fertile soil that has many layers of potentials waiting to be manifested – internal seeds that need to be nurtured and tended to, so that they may sprout, grow, and prosper.

Often the individual holds potentials that he does not activate, thus not actualizing his magician-alchemist ability to create “something out of nothing”, which in turn prevents renewal and enhanced self-fulfillment.

The individual’s path of Enhanced Fulfillment on Earth is varied and can exist on many different planes. The magician-alchemist lives according to the principle “to see what exists, to emanate from what is, and continually renew”, where with each step he emanates from an internal and external step of development that is based on past achievements. This becomes the foundation for the next step of development, which brings renewal and nurtures the seeds of hope as he moves on to new horizons.

These new horizons are not expressed solely as a “conquering” of external goals but may also be seen as a process of self-discovery, where the individual discovers new and unknown emotional-mental qualities and aspects of the self that over time becomes second nature.

How can we nurture the seeds of hope that exist in each and everyone as potential waiting to take root? This is a process where the individual learns to coordinate the internal emotional and mental forces to serve the magician-alchemist existing within, so that the body and psyche may become a harmonic tool through which he can express himself and devote himself to change and transformation.

In this state, the individual learns to identify a clear and genuine desire that is free of external influences and distractions, and thus is able to develop pure thoughts and emotions, and devote himself to a process of renewal, even if this awakens fear or stands in contrast to habits and conditionings that he identifies with.

This is a process where one leaves his comfort zones, entering into new areas of development, where the individual can grow and expand beyond his existing skills, embracing that which exists beyond the known and familiar ways.

This potential is only a potential. It is activated only when the magician-alchemist uses his wand, bringing it into fruition, watering and nurturing it.

How are these potentials activated?

It is required to allow the potentials to be expressed. Often people do not fulfill the potential seeded within because they are afraid to leave their comfort zone and security that define them and grant a sense of control, worth, and strength - and move to new and unfamiliar experiences, where they lack skill, knowledge, and may feel uncomfortable.

If you find that you are afraid to uncover unfamiliar internal and external terrain, remember that you are a magician and that the alchemist within asks you to continue to water the seeds of hope, make magic, and turn theoretical potentials into a physical reality.

By watering the seeds of hope planted within and allowing them to root, one creates a type of “green-house”, a safe haven that is free of discord, resistance, hesitation, or obstacles within the psyche. This haven makes it possible to maintain an inner realm of personal strength and ability, devotion, diligence, and a willingness to learn new skills - all of which create a rich foundation for continual renewal.

Thus, these delicate seeds, which hold a broad spectrum of new possibilities waiting to sprout, grow strong, turning from a sapling that needs to be protected and nurtured, to strong bushes integrated within the existing internal garden.

This is a process where one seed after another, one plant after another, the individual nurtures his a flourishing internal garden which is continually renewing itself and creating an internal atmosphere of abundance and wellbeing - Heaven on Earth.