?Do you agree to be inspired by others 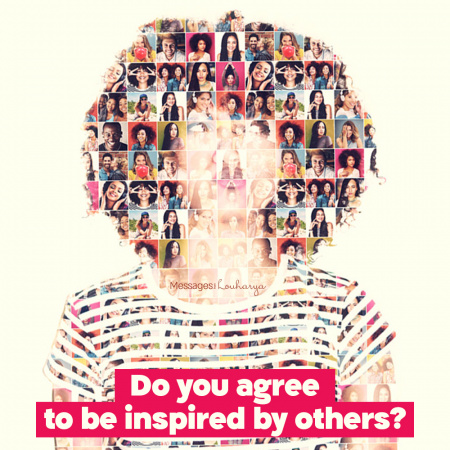 Part one - We are meant to enrich each other, or: the whole is greater than the sum of its parts

The fabric of our human society is a beautiful one.

We are meant to enrich one another and allow each other to observe reality through many different and varied eyes.

When we agree to be inspired by others, to learn from them and accept their point of view, we allow ourselves to expand and become exposed to a reality that is wider than the personal reality that we perceive through our subjective point of view, which is partial and narrow.

There are many advantages to this, both on a personal level where the individual expands his horizons, receives a new perspective, enriches others and is being enriched by them, and also on a collective level, where society becomes a community whose members are close to one another, feel empathy and a sense of mutual responsibility, unity, and appreciation for being part of a whole that grants them great abundance of points of view. 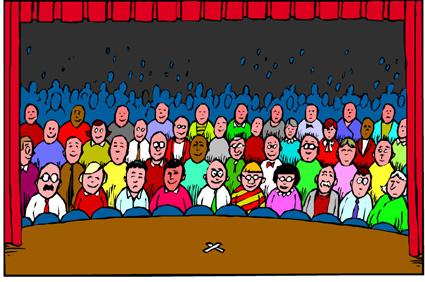 In order to illustrate this idea, try to imagine many people sitting in a hall watching a performance or a movie.

When each and every one of those sitting in the hall is aware that he sees and experiences the show or the movie from a specific, unique and subjective point of view, he recognizes that he can enhance his experience of the show through a willingness to receive impressions and points of view from the other participants during the show.

Thus, the individual leaves the show with a richer experience and a much broader perspective than his personal and subjective one.

Our lives as individuals and as a society are very similar to what is described in the example I gave. We are all active participants in the show of life on Earth, watching, listening, smelling, tasting, touching, and experiencing it through our thoughts and emotions.

We are meant to enhance and enrich each other, share our different points of view, and bring them together in a way that creates a complete and broad picture.

Many human beings forget that “we are all sitting together in the same hall”, or that we share the same world. They do not remember that their personal point of view is not absolute and thus they become attached to a subjective perception of reality, they see it as an absolute reality, identify with it, and often become attached to it as something that defines the self.

Becoming identified with a personal point of view and perception of the world, as absolute, and attachment to a subjective perspective, as that which defines the self, leads to a situation where instead of trusting and relying on our ability to receive additional points of view that differ from our own personal point of view, many people feel threatened by this and are afraid to undermine their known and familiar state of affairs, thus closing themselves from the ability to receive inspiration and influence from outside.

Part two - Being closed to the outside world and clinging to a personal point of view, or “my world is as narrow as that of an ant”

As mentioned in the first part, identification with the personal point of view and perception of the world as that which is absolute, and holding on to a subjective perspective which defines the self, leads to a place where instead of trusting and relying on our ability to receive additional points of view, different than our own, many people feel threatened by this, afraid to undermine the known and familiar state of affairs, and thus close themselves so they cannot receive inspiration and influence from outside.

There are two central states of being closed to the outside world:

???? The first one is a passive state: impenetrability, rejection, and apathy that creates a state in which the individual lives within his four walls while ignoring all that is different.

In both cases described, the individual remains a prisoner trapped by an ego that holds on to a limited and defined narrative through which it separates the individual from others, maintaining attachment to the known and familiar. This is a story through which the ego defines the self, the skills, habits, and conditioning, and maintains its comfort zones, thus preserving a narrow and limited point of view.

This narrow point of view will lead to rejection that pushes away anything that might threaten it, both via violence or by pleasant means, due to a lack of acceptance of anything that might undermine the individual’s comfort zone and the ego’s narrative.

And thus, in interactions with others, where there is an opportunity for mutual enrichment, improvement, disillusionment, and expansion, the individual will unknowingly create rejection and push away the opportunity to be enriched and influenced in a manner that might change him and threaten his identity, self-confidence, and a familiar comfort zone.

This rejection of the possibility to be inspired by others will come in a variety of ways, among them:

???? Categorizing others according to a personal point of view and through what is known and familiar (they are not telling me anything new)

???? Classifying others in a manner that invalidates them and what they bring (creating delegitimization of others)

???? Making assumptions based on a subjective and personal point of view (projecting the personal narrative, behavior, and patterns of thought on others)

???? Invalidation, disrespect, and devaluation (belittling and showing contempt for others due to unwillingness to embrace what they bring)

This leaves the individual trapped in his subjective and narrow perspective and does not allow him to grow and draw inspiration from others. Thus, the spectrum of personal reality remains limited and trapped by the individual’s personal perspective, while he is unable to see beyond what he perceives and grasps.

In addition to all this, an individual that feels smallness, that is unsatisfied with his personal realization, frustrated or operates from the perspective of his ego, competing for resources, or in a state of survivalism, will feel anger, jealousy, and resistance when he meets people who are an inspiration and can enrich him, empower and advance him.

This is a paradox where the feeling of smallness and ego create an illusionary experience of competition over resources and encourage separation, jealousy, and becoming closed to the outside world instead of encouraging mutual cultivation, growth and the recognition that having a model for inspiration does not diminish one but rather acts as a mirror that reflects possibilities for growth and expansion.

Part three - Life as a realm of opportunities for receiving inspiration, or -  are you willing to be enriched in a manner that changes you?

✅ There are many people around us that can enrich our lives.
✅ There are many fascinating points of view that reveal new avenues of knowledge and understanding.
✅ There are many individuals that have accomplished achievements and proven that things perceived as impossible or complex - are in fact possible. These individuals are an inspiration that enables to leave the comfort zone. These people undermine the excuses of the ego that does not want to make an effort, and they prove that with perseverance, discipline that stems from meaning and an honest desire, we can rise above, manifest dreams and reach achievements that contribute to our Enhanced Fulfillment.

✅ There are many people who through the choices they make and the lives they live, express peak points we may aspire to, and thus realize they are achievable.
✅ There are many focal points within human society, that are an inspiration we may seek to emulate, learn from, thus opening up a wide range of possibilities for expression and manifestation.
✅ The era of social networks has greatly expanded the range of inspiration channels that are at our disposal in a variety of areas, that more than ever allow us to broaden our point of view, exposing a variety of alternatives in a wide range of aspects, which enriches our personal perspective.

???? In order to create reciprocal relations with all this abundance, we are required to adopt an honest inner agreement to receive inspiration from others, to change, learn, experience and allow new things.

When you open yourselves up to receive inspiration from others, you become open to the possibility that a new desire will awaken within you, pushing you to change, move you out of your comfort zones and compel you to change your habits, release addictions and discover new facets and new expressions that you were not previously aware of, because they were not part of your perception.

Reality is in the eyes of the beholder

If you do not agree to see what lies beyond your personal perception and experience, you block out the ability to grow and evolve and discover new worlds.

If you are not willing to observe new alternatives with curiosity and open-mindedness, you remain within the confines of that which is known and familiar, thus blocking yourself from the possibility to be nourished by the wealth that surrounds you, which brings regeneration and expansion.

Open yourselves to the human abundance that surrounds you and remember that we were meant to enrich each other and that you are surrounded by a variety of different people that can provide inspiration for you. The whole is greater than the sum of its parts. ????