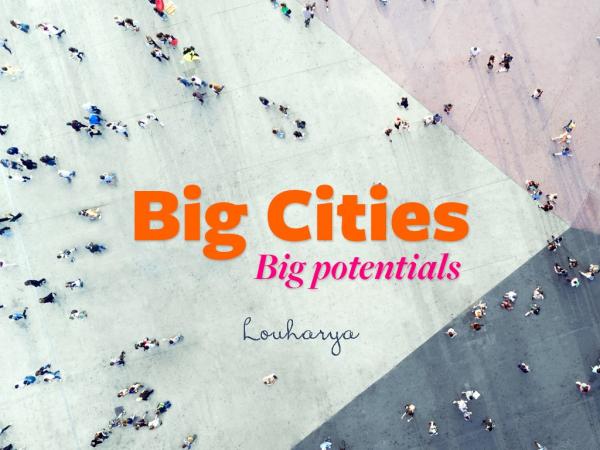 Big cities as centers that accelerate the development of the society

Throughout the world, the central cities, which are big and heterogeneous, are extremely important centers that set into motion the development of human society.

The big cities usually attract different and diverse people that would not normally interact, if it weren’t for their decision to leave their place of birth and reach the big city.

Many of the individuals who choose to migrate to the big cities come to fulfill dreams, inspired by Active Will and Wishful Heart to break through patterns, to speak freely and with creativity. They see the big city as a space that allows them to break free of norms and images, and to re-design themselves in all areas of their life.

The collective DNA of a society

In order to understand what occurs in big cities, we need to recognize that all cultures and societies have a type of collective DNA that holds values, norms, perceptions, historic and cultural traditions, and the different layers of the social structure.

The collective DNA was originally meant to create continual development and to evolve through the mutual enrichment created by the different and diverse that compose the society. Thus, bringing new ideas and fresh perceptions that open new possibilities that were not previously available, leading to development and self-fulfillment.

In actuality, human societies often tend to stagnation as a result of clinging to an absolute identity shaped by definitions such as nationality, religion, language, gender, skin color, and the traditions, activities, and beliefs that are a product of those definitions.

The absolute identity that is identified with and influenced by traditions, norms, and values, whose purpose is to preserve the self-definition creates a sense of belonging, worth and existential confidence. However, it prevents the individual from self-discovery and exposure to additional layers of his identity that exist beyond the glass ceiling.

Thus, if we observe the human society we will recognize that much of society maintains conducts that are conservative and focused on calming the fear of a loss of identity, leading to stagnation that blurs the self-identity, engulfing it by norms, patterns, values, and manners of conduct.

Some of those who migrate to the big cities hold on to their identity and create within the city a microcosm of their society of origin. Thus, they cast into the DNA of the city the unique character of the culture from which they came, and contribute to the diversity of the city, and the heterogeneity and possibilities that it offers.

Alongside all this, there are those who come to the city to leave their past and traditions behind. Consequently, the process of migration allows the individual to let go of the collective templates of his origin that defined the self-identity, and allow himself to draw a new and independent identity, free of limitations and open the broad expanse and tremendous diversity that the city offers.

Big cities - a mixture of cultures that represent heterogeneity and innovation

In the big cities, many different DNA arteries merge together. Thus, many DNA chains that hold cultural, folklore and consciousness of the different cultures and layers of society blend together and create a new combination.

This new combination presents a collective DNA infrastructure in which new and fresh combinations can produce new potentials and create a collective field of consciousness that is dynamic and breaks free from the endless circle of rigid norms, traditions, and belief systems.

This is a fertile foundation for new ideas, opinions, and lifestyle that allows for a tremendous amount of creativity.

Thus, the big cities are those in which new trends come to life, leading society and humanity towards the next step of development.

The human matrix of development - part of cosmic cycles

If we look all that was described so far from a broader perspective, and observe it with an open mind that does not solely identify with the perceived reality - we will notice that throughout human history, as we know it, the development of humanity has been the result of a series of developmental pulsations that create a development peak points that influence entire periods of time.

These peaks stem from the cosmic energy that is channeled to Earth, influencing the collective consciousness fields of the different human societies.

Humanity is also part of this cosmic consciousness field. However, humanity is not aware of this and therefore does not maintain reciprocal relations with this field on a conscious and aware level.

Humanity is part of the Unified Field, part of the rich and diverse cosmic tapestry that holds many types of intelligent life forms. The collective field of cosmic consciousness, the Unified Field, supports the development of human society and seeks to help humanity to free itself from limitations, and move forward to the next step of development, which holds prosperity, wellbeing, mutual cooperation, and the recognition that all human beings come from the same source, from the collective Unified Field.

Cosmic energy is being channeled towards Earth. This energy is charged with information that is meant to create a leap in technology and consciousness. This energy seeks out centers within humanity, which can contain this energy and interact with it.

Thus, often we will find that big cities provide fertile centers that are able to assimilate this cosmic energy because they hold an active infrastructure through which innovation and futurism can be channeled.

We can look at two large cities in Israel, Tel Aviv and Jerusalem, as an example for the ability to lead social innovation and futurism, or alternatively maintain conservatism that creates stagnation.

Many people look down on Tel-Aviv, seeing it as a city that exists in a bubble that does not represent the Israeli society. Some even call the city “Tel-Aviv State”.

In actuality, the cultural mixture of Tel-Aviv creates a diverse and heterogeneous collective DNA that is open to new perspectives which are not influenced by distorted values, norms, prejudices, conservatism or stagnation.

Tel-Aviv is a realm that is lively and active and creates an alternative environment for actualizing Israel’s next step of development.

While Jerusalem struggles under the weight of a historic baggage that perpetuates past traditions, Tel-Aviv continues to develop and create new trends that gradually penetrate the collective consciousness of Israel, and is connected with the collective consciousness of other big cities throughout the world that pulsate with the beat of development, taking humanity to the next evolutionary step.

We are living at a period of time that re-designs the future of humanity.

The big cities hold a wide foundation for the establishment of this future, thanks to the human power living within these cities, and is willing to awaken the consciousness with curiosity, openness, and courage, to move beyond the familiar human identity, and create the new humanity.

This is heterogeneous and cosmopolitan humanity, composed of the different and diverse who cast away past residues and move forward, stemming from all of the human wisdom achieved so far and, without prejudice, create mutual enrichment where the whole is greater than the sum of its parts.