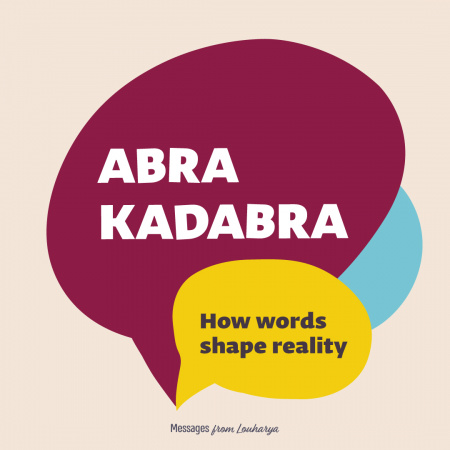 The language we use reflects our consciousness and defines the reality we experience.

Language is based on a system of context the brain creates by using words and symbols, which create a collection of sentences, thought patterns, and cognitive pathways that express the perception of reality.

Different words are connected to different areas of the brain.

In this manner, the brain maps out the language and connects each word to different areas of the brain and different aspects of the human being and of human life.

As you expand your consciousness and improve self-awareness and become more actively aware, you become more conscious of your use of language and deepen the attention you dedicate to it.

In this manner, you shape your perception of reality and train your brain to expand its ability so that it supports a broad, varied, and rich perspective.

For example: when a person thinks or contemplates the word "God", it will represent their perception of reality. One will think of an old man with a long white beard, sitting on a cloud in the sky. Another will think of a father figure. The third person will experience distance, fear, and reward and punishment. The fourth will think of sanctity, and about laws and commandments. The fifth will think of universal love. The sixth will think of the forces of nature. The seventh of quantum energy and the forces of the universe, and so on and on…

That is, the reference to the word "God" will represent a perception of reality, a threshold of consciousness, and belief systems that give rise to an approach to life and influence the experience of life and the lifestyle.

In the first part of this consciousness packet, we understood that the more the individual’s consciousness is open, diverse, and broad, the more number of connections a single word can have to different areas of the brain which are responsible for different domains of expression and fulfillment.

Meaning - when a person is of little awareness and limited consciousness, each word will have a specific and absolute context.

Thus, the individual will experience a dual and limited reality, divided into parts that are separated from each other.

The more open and aware the consciousness becomes, the more brain grants multiple contexts and meanings to words that reflect the broad mental and conceptual spectrum of the individual, their flexibility and openness, and the fact that they do not perceive reality as absolute, flat and dual, but rather perceive a layered reality holding a variety of aspects, where everything is interconnected.

I will try to clarify this idea with an example:

Let’s look at the combination of the words building-block
What associations come to the surface when you see or hear these words?

Meaning, these two words can have a simple and limited context, as well as a context that expands into a variety of areas.

Most human beings were taught to classify reality through words and language that represent contrast:
Black and white, good and evil, permitted and forbidden, reward and punishment, and so on…

Thus, perception of reality shifts between two poles, and many people are not aware that life moves along a broad and layered spectrum and is a part of a holistic and comprehensive whole.

The more that the individual is open, their consciousness broad, and awareness present - the more they are able to contain the broad contexts and their brain will enable them to perceive a layered and rich reality where everything is intertwined.

Food for thought - human language which is connected to different areas of the brain, will be limited to the perception of reality and to the consciousness threshold. Therefore, the use of familiar language will often tie the individual to a predetermined set of contexts.

If we go back to the example of the word "God" that appeared in the first part of this column, then this word is charged with the meaning associated with the various religions that set the perception of divinity to a specific and limited paradigm.

Meaning that in order to change or expand the perception of divinity, one is required to move beyond the familiar contexts and the baggage attached to that word and to expand toward additional meanings.

If we replace the word "God" with the words "quantum field of consciousness," or with the words "comprehensive field of intelligence," or with "the source of all existence," we will open up new possibilities for understanding the essence of divinity.

The new possibilities stem from the fact that the use of alternative words and a new language, release the capture of the concept of divinity within the common perception and dissolve the association with specific areas of the brain and the perception of reality they represent.

When humanity is required to evolve into a new evolutionary level, grow safely into the twenty-first century and the new era, it is required to learn to use a new language, one that is not charged with limiting connotations. A language that represents new meanings that dissolve the glass ceiling, change the limited perception of reality, and reveal new values and a new regularity.

In order to do so, , our language needs to be updated and we need to begin using words that represent a new narrative that is free of limiting contexts and of the limited neurological network that operates within the boundaries of a limiting and partial perception of reality.

This is the reason that when I write the different consciousness packets and columns, I use language that brings new values and opens the neurological system to new contexts.

Language = consciousness, and the words you use allow you to shape your internal and external reality.

Try to reveal and seek out new words and new language contexts, even if the words sound complex, high, weird, or unclear.

This will make your brain more flexible and will train it to contain additional layers and dimensions, exposing you to an expanded perception of reality and new meanings that were thus far hidden.

Yours with love and will