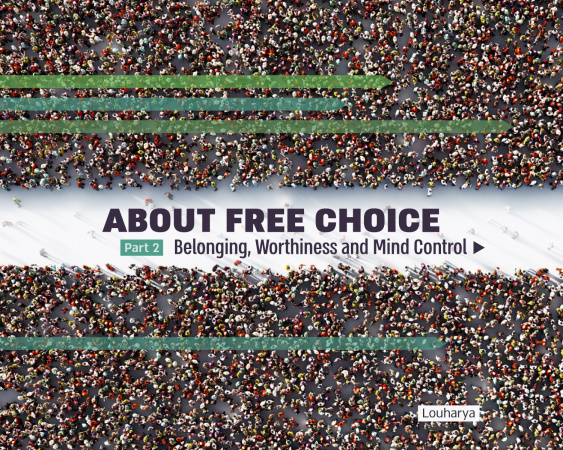 In the first part of this article, I took you on a journey from divinity to humanity, and clarified how aspirations to belong, to be accepted, and loved are powerful that are embedded in each human being as a cosmic force that connects and motivates.

In this part, I will discuss with you how human diversity (race, cultures, languages, nations and much more) and free choice are factors that were intended to enable the evolution of humanity in a variety of channels simultaneously, and thus allow for constant growth, prosperity, renewal, and ability to see a wide picture from many angles.

I will also explain how, in practice, there is a cynical use of free choice, of the individual experience and the desire to belong in order to control humanity.

How does this happen? How do these control mechanisms work? How is pure human nature being abused?

All of this in this part of the article.

I wish you an empowering and awakening reading

The human experience was originally intended to be one of connection with all that exists, of mutual enrichment, confidence, acceptance, and love. Meaning, humanity with all its diversity and variety was meant to experience itself as one living fabric, with a multitude of different parts expressing a great heterogeneity.

Each individual was originally meant to live a physical life expressing their uniqueness and personal character, while at the same time, experiencing the self as an inseparable part of universal unity- a unity that cradles the individual in its arms, granting a sense of confidence, acceptance, love, and belonging.

Religion, race, gender, different languages, nations, cultures, were only intended to be tools through which the individual expresses themself during their human experience.  These are tools meant to enable variety within a broad spectrum of possible experiences and manifestations.

The multitude of languages, cultures, races, nations, spiritual approaches, as well as the different geographical locations, were all meant to enable a universal human community that has many faces and a variety of expressions creating together a rich mixture where the whole is greater than the sum of its parts.

The story of The Tower of Babel, as an archetype, describes the process of separation into nations, cultures, languages, and races, and the propagation of human diversity around the globe as a negative process, while in fact, this process was intended to allow for simultaneous evolution through a variety of channels and paths that create mutual enrichment, and empower human evolution.

Fifth chapter -
The cynical use of free choice, the individual experience, and the desire to belong as a means to control humanity

In this chapter, I will describe how free choice, the desire to belong, be accepted, and loved, is being misused to control and manipulate the public, to gain power, money, influence, and prestige.

As mentioned at the beginning, humankind’s origin comes from the cosmic realms of universal unity.

The different divisions existing among humanity create variety and heterogeneity, so as to allow and encourage diversity, a multitude of potentials, and different types of expression within a society whose cosmic origin inherently hold unity, connection, coordination, mutual responsibility, and advanced modes of communication.

Meaning, the differentiation, separation into ethnic groups, nations, tribes, languages, systems of faith, religion, and gender were meant to support humanity in its journey of evolution upon Earth, and enable it to simultaneously evolve through a variety of channels, based on the understanding that the multitude of expressions and paths of development will support and enrich each other.

Establishing free choice was also intended to support human evolution and enable a variety of simultaneous channels of development, representing different and varied choices emanating from the individual, meaning, from each and everyone’s unique choice.

Free choice was intended to act as a differentiating tool that opens a broad range of developmental possibilities for individuals who have a clear and aware knowing of their unified origin and their being part of one community, a living fabric where all parts are interconnected and influence one another.

In actuality, mankind’s diversity and division into nations, languages, peoples, religions, and gender, rather than becoming a tool of diversified expression and development, turned into a separating tool that creates division, often turning one group of people against another without realizing that we are all parts of the same whole.

2. How is the desire to belong, be accepted, and loved misused?

All that is left of cosmic unity and the aware knowing that all human beings are part of the same universal community and that we all come from the same source - is a deep aspiration to belonging and connection, without understanding where does this desire come from and the ancient and profound truth it represents.

Since the source of humanity is the cosmic unity to which we all belong, within each and everyone lies the desire to belong, be accepted, to experience worth, and confidence.  Each and everyone wants to feel coddled, appreciated, and loved.

We may use this desire to create mutual enrichment or we may misuse it.

In today’s society, many factors cynically misuse the inherent aspiration to belong and connect, and the sense of confidence and worth this provides for the individual.

This exploits the ancient desire to belong and connect, by using it in order to manipulate, gain mental control, and give people an illusionary sense of meaning and worthiness.

(There are many examples of this, and I will list some of them in just a moment. However, it is important to remember that I am not describing an absolute reality and that within these different areas there are those that adhere to values and hold a pure intention).

Egocentric populist leaders make use of this aspiration in order to incite emotions, gain strength and sympathy, intensify a negative or positive emotional experience connected to nationalism, creating division and separation between those who are “deserving” and “undeserving”, those that “belong” and those that do not, thus controlling the public opinion by increasing the political/national/religious/ attachment which defines a sense of belonging, meaning, and worth.

Often you may see religious leaders using the desire for meaning and belonging to gain power and control, increase the number of their followers and glorify the religion they represent, (while disqualifying and negating other religions and beliefs, excluding entire segments of the public, and categorizing many ideas as illegitimate ).

Corporations and commercial entities, make use of the human need to feel accepted, loved, and belong, in order to create trends, fashions, and market products intended to make the individual feel like they belong, are important, and worthy.

An additional example is social media influences who make use of the desire to belong to encourage their followers to identify with them and the image they are cultivating and marketing to the public. They do this to gain popularity and to sell products to their followers and advance the interest of business entities that are connected to their personal interests.

Social media influences often gather a community of followers, cultivate their identification with them, thus continually encouraging a sense of belonging, worth, and meaning provided by this community.

This is a negative process that abuses the followers and manipulates them, creating a tight bond of dependency which cultivates a herd mentality.

In this symbiotic and destructive relationship, the influencer depends on commercial entities for their livelihood, and their followers as consumers.  As a result, the reciprocal relations cultivated by the influencer and the followers lack authenticity and are tainted by personal interests, manipulation of consciousness, and the use of emotions to encourage consumerism while planting subconscious messages that create a divergence from the authentic self, imitation, and a herd mentality.

In contrast to this, there are also social media influences creating digital communities that make use of this desire to belong and love in order to advance innovative ideas, denounce injustice, enhance the self-worth of the members of the community, encourage variety and diversity and seek to gain the power to influence and change reality.

However, in most cases, the desire to belong, be accepted, feel a sense of worth and confidence, is exploited to manipulate people thus gain power, influence, money, and status.

Throughout human history, a process of reversal of meanings has been created. This is a process in which the awareness that all humankind is part of one living fabric, a universal community, has been forgotten, dissolved, and all that is left is this faint memory being expressed as a deep aspiration to belong and be loved which interested parties take advantage of.

This is a cynical and abusive misuse of this desire, which further distances humanity from the universal unity that lies within it and as an integral and natural quality. This also drives the public to become addicted to immediate and momentary substitutes that veil the consciousness, create dependency on an external source of satisfaction, and weakening the ability to connect with the authentic self.

Nowadays, free choice works against humanity, and instead of being a force that supports and advances, ensuring heterogeneity and diverse channels of expression and fulfillment that support the individual and the whole - the free choice has turned into a blocking force that creates a herd mentality of following trends and norms that leave humanity locked in a closed circle of addictions, inner struggle, self-destruction, and the destruction of planet Earth.

Many people use their free choice to make choices that harm themselves and others and take decisions that are biased by the different influences existing in our world, some of which are negative, addictive, and even destructive.

As mentioned, we live in a world that is full of interest parties, seeking to divert and maneuver the personal free choice to serve their various needs: commercial companies, businesses, social networks, technology giants, politicians, financial groups, the religious establishment, social media influences, and more factors - some of which operate in clear sight, while others act in the shadows seeking to influence, gain power, money, and more influence.

When free choice lacks awareness and is detached from values, it leads to a life that leads nowhere, often harming both the self and the whole.

This choice only appears to be free, while in fact, it is not, because the individual is influenced by external systems of diversion that they are not aware of, therefore being unable to connect to their true free will.

As mentioned free choice also leads to herd mentality, as people blindly follow trends and egocentric populist leaders that lack vision, without maintaining original thought and an aware free choice which identifies the connection between choice, results, and their consequences, and how this influences the self and the community of which the self is an inseparable part of.

In the next part, I will talk to you about how we can overcome and deal with the various forces at work within us and in our realm and abuse the free choice and human aspiration for belonging, acceptance, and love. I will also explain that we are the generators of change and how we can pass it on and influence.