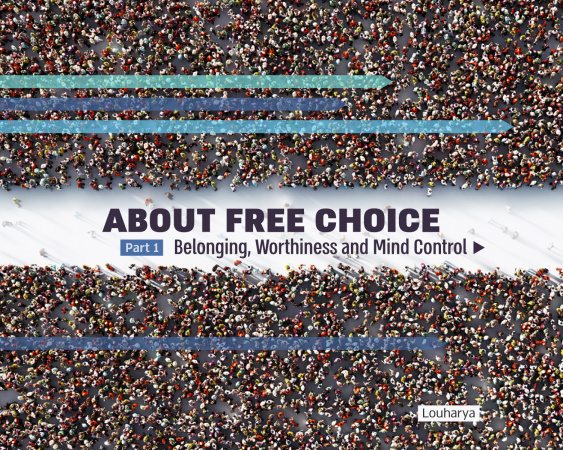 I believe that in order to live a full and complete life, we are required to see life here on Earth in its full context.  In other words, we need to rise above the tendency to view reality from a personal subjective perspective, which is focused on the self-identity and is fully identified with it and open up to see the comprehensive whole to which we all belong, regardless of the different identities existing within the realm of possibilities on planet Earth.

This is an evolutionary process of development of the human self: from a selfish state of being, one that perceives the self as separate, threatened and in constant survival mode, towards a relaxed, open, and curious state of being which is willing to ask questions, challenge that which is known and familiar, think originally and independently, and observe confidently and objectively beyond the limited borders of the self.

This evolutionary process paves the way towards a personal acknowledgment of the source from which human beings manifested here in physical bodies, and towards familiarization with the interdimensional cosmic realms, and the ability to view the world of physical reality as part of a much broader continuity of life.

We live in a world where reality is changing greatly, undermining that which is known and familiar.  This is a state that can cause many to desperately cling to all that is known and familiar in order to feel stable and on safe ground, or, on the other hand, it can lead to an awakening, a spiritual and conscientious search driven by the desire to create change.

In the following article, I will lead you on a journey to the source of the human self.

This is a journey from divinity to humanity where I will help clarify how aspirations to belong, to be accepted, and loved are powerful that is embedded in each human being as a cosmic force that connects and motivates. I will also clarify how these aspirations are being used in order to control, manipulate, and exploit people, thereby distancing them from their authentic connection to themselves and from a harmonious connection with one another.

I will also explain how free choice is being used in order to manipulate and disempower the public, and I will bring understandings about the next evolutionary step where humanity is required to break free from this control and embrace the freedom that lies in aware and conscious free choice.

Finally, I will describe how you may use free choice and the human aspiration to experience belonging, worthiness, acceptance, and love as a tool that supports and enhances the individual and the whole, and how each one and all of us together is creating change.

In order to make things accessible, I divided this article into seven chapters that will be published in three parts.

The pursuit to understand the worlds that exist beyond the physical dimension, takes here on Earth two main forms of consciousness and spiritual search: The first is religious and the second scientific.

Religion seeks to dictate a defined and absolute path that brings the individual to the divine and sublime, while science seeks to find a doctrine that will contain the different scientific theories and settle the contradictions existing between them.

Often these two approaches collide with each other and seek to be exclusive, control, gain power, and recognition.

Many scientists reject anything that is not provable using familiar scientific tools, while many from the clergy reject approaches to spirituality and life that are not compatible with the religious paradigm and its narratives.

This often creates a religious hegemony which offers limited and obsolete belief systems that are frozen in time, alongside a scientists hegemony that negates and underestimates alternative approaches, and are often nourished by vested interest parties that fund research in a biased manner, which does not seek to benefit all, but rather a biased business consideration.

Recently I read an interview with Professor Haim Eshed who was the head of the Israeli space program and wrote a new book called: “The universe Beyond the Horizon”.

In this book, he states that extraterrestrials from all over the universe are walking among us, that close encounters of the third kind are just beyond the corner, and that the “Galactic Federation” is stalling the publication of this information in order to prevent panic. He says that extraterrestrials prevented a few nuclear disasters, what really happens at the mysterious ranch in Utah, and when we will be able to visit in a black hole.  In the book, he describes the glass ceiling of the scientific and religious establishments, and how extraterrestrials and aliens have communicated with planet Earth long ago, while this has been kept a secret by governments and vested interests.

In this interview, he says that since he achieved his scientific goals and gained international recognition, he allows himself to engage in a subject which the academic mainstream condemns and shows contempt for.

He adds that: “If I had said all this five years ago, they would have hospitalized me...every academic institution I approached, even though I was well respected in other subjects, once I approached this subject they dismissed me saying this guy has lost his marbles.  Today things are different, today they say - interesting - but changing science’s paradigm is harder than changing a very orthodox Rabbi’s paradigm”.

In answer to the question if he has anything to lose by discussing this issue he answers: “I have nothing to lose. I received my titles and awards; I am respected in universities overseas. Also, trends are changing, and people are willing to talk about this…”

For a long time now, the limiting beliefs and glass ceiling of both science and religion have prevented humanity’s next step of evolution.

In the next step of evolution, science and spirituality will be intertwined, and the spiritual perception of divinity will dissolve the limited and childish narrative about god that is widespread within humanity, in favor of a new, mature and wise approach that can contain a multidimensional and quantum world, in which divinity is a dynamic, huge consciousness field with multi-dimensions, a cosmic fabric which we are all an inseparable part of, a field of experience that we can maintain reciprocal relations with.

The divinity that we are all part of, invites us to create reciprocal relations based on continual development and transformation, wisdom, and a broad and aware consciousness that enables an understanding of abstract worlds, and the mysteries of the cosmos, and the ability to decipher advanced ideas and translate them into the physical world as value systems and modes of conduct, supported by advanced technology that serves personal and collective growth.

In order to conduct harmonious reciprocal relations with divinity, each one is required to return to the divinity that exists within.

This is a profound process that requires a return to the authentic identity which rises above the definitions and divisions prevalent among humanity. In this process, the tendency to define reality in a polarized and absolute manner (good and bad, angel and devil, lowly and sublime, etc), and define the self in a limited and dichotomic manner (race, religion, sex, nationality, and so on), are converted into a new perception that sees the many layers that compose reality and recognizes that they are all part of the whole, part of the same fabric.

Second Chapter - The Language of Divinity

The language of Divinity is not absolute nor polar, because, in the quantum and interdimensional world of divinity, everything is open to endless spectrums of possible expressions and manifestations which are all part of one fabric of potentials - a unified field.

In order to connect with the inner divinity and the divinity latent within the self, it is required to learn the language of divinity, which is an interdimensional language, and learn to decipher its complexity and inter-dimensionality, and recognize its regularity, which represents cosmic principles of conduct that we can learn and use in order to manifest a life of growth and development.

Divinity’s language contains a variety of principles and values, some are simple while others are complex to human understanding, which is trapped in a three-dimensional perception and identified with the relative regularity of planet Earth, seeing it as the only and absolute regularity.

For example, one of the basic principles of the language of divinity is the law of attraction (like attract like), which is a divine principle. Accepting and using this principle invites us to understand that the self attracts that which is similar and rejects that which is different.

Accepting this divine principle gives birth to maturity and personal responsibility and enables one to influence personal and collective reality.

Values such as human dignity and liberty are also values that translate the unified divine essence - a comprehensive cosmic field of intelligence, into a physical experience.

The divine perception sees all human beings as an inseparable part of the same cosmic fabric.

The translation of this perception into a social mode of conduct that remains loyal to human dignity and liberty, regardless of religion, race, or gender, is what enables this divine principle to be expressed in the physical realm.

The ability to adopt a new approach towards divinity stems from a willingness to look at divinity at eye level, directly, with modesty and strength, and operate with it as partners who together create reality in an informed, aware and intelligent manner, which weaves the personal and subjective perspective with the comprehensive, objective and impersonal one, out of a clear and lucid recognition that we are all part of the same whole.

Where do we come from?  Is life here on Earth random?  Who created all this?  Is there life beyond the physical life? How can we communicate with additional worlds and dimensions?  Are we alone in the universe or are there other intelligent life forms other than the human one?

These are existential questions that humanity has asked since the dawn of its existence.

These questions try to give meaning to our existence, go beyond what is known and familiar, and find a way to dissolve the personal and collective glass ceiling.

The answers to these questions lie within each one as an ancient memory that can be awakened, and which hold a simple and clear acknowledgment that the human self is part of a much broader universal and everlasting self; and that this universal, everlasting self is part of a huge comprehensive whole, composed of different and varied cosmic entities, experiencing themselves as part of the same unity.

The cosmic universal self, which is also known as the “soul”, is abstract. It has no physical body and is an intelligent energy field, with intelligence that evolves as it moves forward in existence, through a variety of experiences, some of which are physical and corporeal, while others are abstract and lack corporeal form.

In the interdimensional realms the soul comes from, there is a continual experience of unity, and all souls experience themselves as part of one living fabric. This experience of an individual self who is weaved with additional individual selves into a dynamic fabric that is evolving both separately and together, grants a profound sense of belonging, confidence, love, fullness, and the ability to continually receive orientation through the reciprocity between the many points of view that share with each other impressions, perspectives, and comprehensions in a simultaneous manner.

In the next part, I will talk to you about human diversity and free choice as factors designed to enable development in a variety of channels simultaneously, and about the cynical use of free choice and the individual experience and desire to feel belong in order to control humanity.